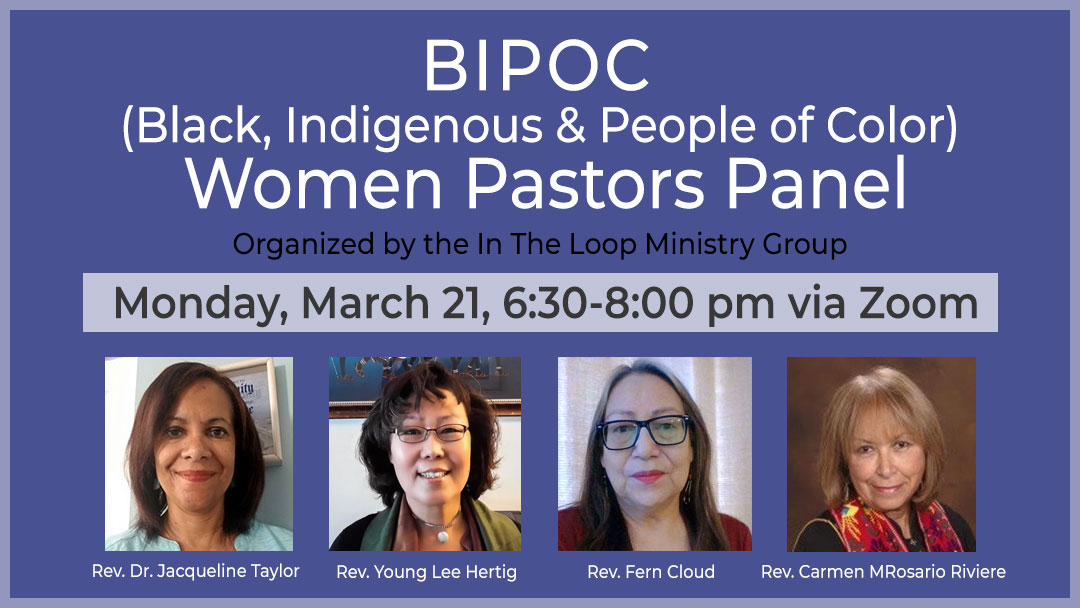 American Indian. Black American. Asian-American. Hispanic. Join the ITL B’More Human Series panel of pastors from different cultural traditions as they share the challenges and joys of being BIPOC women in the ministry. The intersectionalism of gender and race/ethnicity are particularly poignant in the context of religion and religious life.

The panel will be moderated by Rev. Dr. Jacqueline Taylor, Executive Presbyter of the Presbytery of Baltimore. Highlights of her ministry include serving: a three year term as Moderator of the Synod of the Mid-Atlantic; as a pastor of Garden Memorial Presbyterian Church in Washington, DC; as chaplain at both Holy Cross Hospital in Silver Spring in Maryland and Hospice of DC; and Associate Executive in New Castle Presbytery for 17 years. As the PoB Executive Presbyter Rev. Taylor leads 65 churches with 13, 275 members in their quest to be apostles of reconciliation.

Rev. Fern Cloud is a Native American of the Dakota Sioux, she was called to ministry in 2004 and has served in many PCUSA offices, and presently serving as Stated Clerk. She is a champion for environmental justice and native causes, including the Doctrine of Discovery which seeks to undermine the rights of indigenous people. In a recent interview, Rev. Cloud stated, “…Not only are we called ministry, but we’re called to the concerns of our people and those concerns aren’t just spiritual but we’re beginning to see how it’s affecting our spirituality. It’s always concerning, and we see a lot of racial injustice…[including] racism alongside the environment, and we must bring to the attention of everyone.”

Rev. Carmen M. Rosario Riviere, recently retired Presbyterian pastor and co-moderator of the Hispanic/Latinx National Caucus. Born and raised in Puerto Rico. She holds a B.A. in Education / History, and a M.A. in Education/History from the University of Puerto Rico. In 1984 she obtained the degree of MDiv (Master of Divinity) from McCormick Theological Seminary in Chicago. Completed doctoral studies in Latin American Studies (ABD) at the National Autonomous University of Mexico. She was ordained to the Ministry of the Word and the Sacraments in 1984 by the Presbytery of Chicago being the first Hispanic woman ordained to such ministry.

In The Loop ministry group