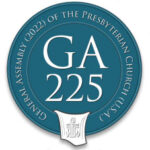 Where Two or More Are Vaccinated: Advice for Churches in 2021
Five science-based suggestions to gather and worship safely as COVID-19 vaccines roll out